This is an awful moment to be trying to get work done: papal abdication, papal election, surprises and analyses of them, and just the sheer coping with so much totally unexpected change in the space of a month. I am trying to give a retreat to the Knights of Malta here at Douai. I had to tear up what I had begun to prepare for them since there was no way I could find the necessary attentiveness to finish it. Luckily, the good Knights are happy for me to work through these last few weeks with them, to attempt to extract the spiritual and evangelical meaning from them, howsoever tentatively. Bless you good Knights!

So with two more conferences to finish off, and sheep to feed, and a Holy Hour to celebrate, plus the normal monastic round of liturgy, posting might not feature highly today. Unless, of course, another ecumenical bonanza materializes, or Pope Francis reveals himself even more in his meeting with the media today. In time of need, one can usually squeeze a few extra seconds from every minute.

So, on a lighter note, some papal pictures from the last few days. They will all get bigger if you click them.

This photo is doing the rounds. Magnificent. Just after his election and dressing in the Room of Tears, Pope Francis heads from the Sistine Chapel to greet the masses, il suo populo. What was going through his mind? 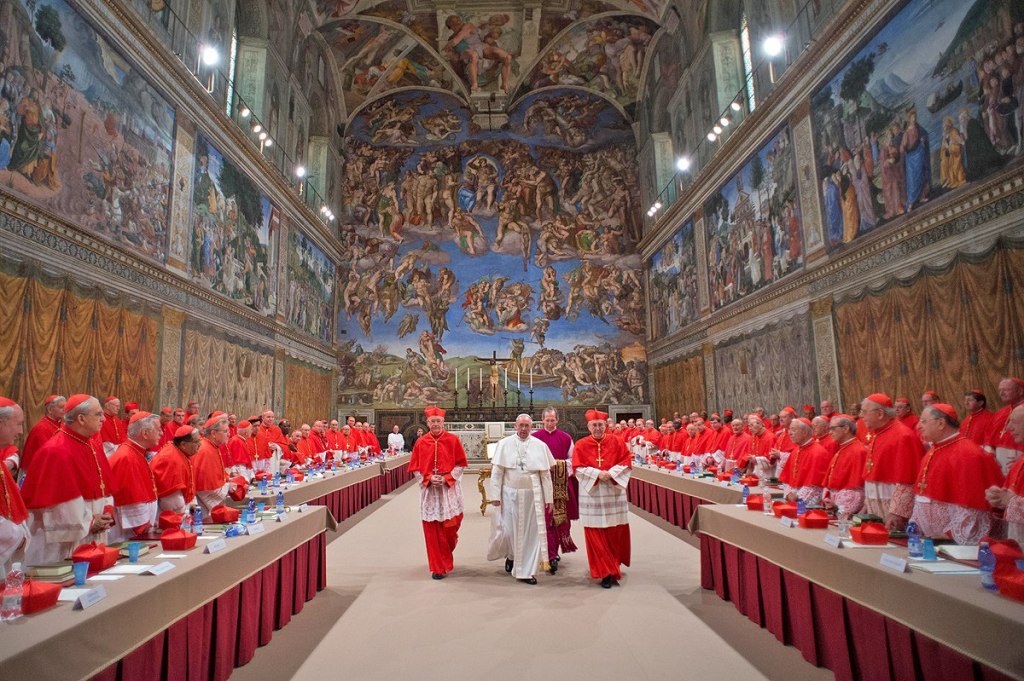 Pope Benedict had been the first pope ever to watch coverage of the election of his successor. 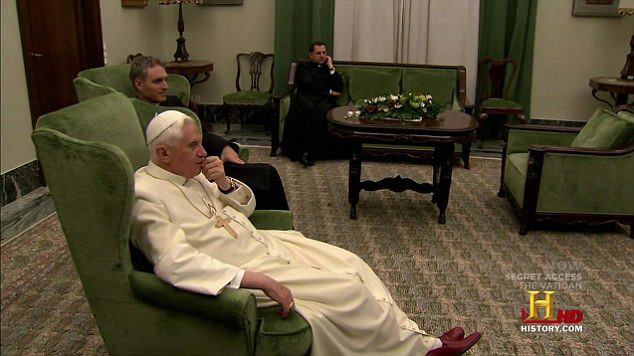 The next morning, Pope Francis, who had returned to his room with the other cardinal at Sta Martha for the night, eschewed the papal limousine, and caught the bus with them to Mass in the palace he had just acquired. Are these pics from a cell-phone armed Eminence?

But catching the bus to work was nothing new for his Holiness, who did the same as Archbishop of Buenos Aires. 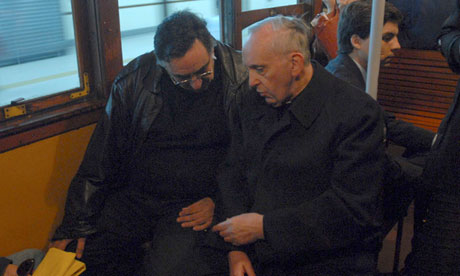 After Mass he decided to make the customary visit to Sta Maria Maggiore, one of the four papal basilicas in Rome, a little earlier than usual. Again, the limo stayed in the garage. He hailed a passing Vatican police car! 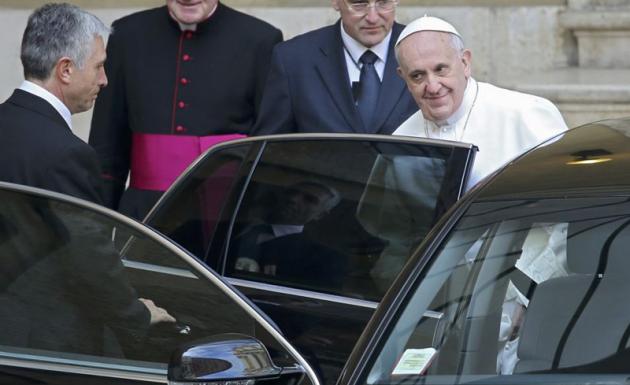 At least in this he was acknowledging to some degree his need for increased security now. He later visited an ailing Cardinal Mejia in hospital, again by discreet mode of transport. His impromptu travels have the advantage of allowing no potential assassin time to plan. Nevertheless, I hope he does not expose himself so much that he becomes another pope to fall to an assassin. His welfare is not merely a private concern: in a profound way, he belongs to us now.

He brought flowers for our Lady.

And paused to pray also before the tomb of Pope St Pius V, the codifier of the so-called Tridentine Mass, or more properly now, the Extraordinary Form of the Mass; St Pius V was also a zealous reformer of Church and Curia. mmmm….

On the way back to the palace, he dropped in at the Domus Paulus VI, the clerical hotel where he had stayed pre-conclave. He grabbed his remaining things and, as you know by now, he paid his bill.

And they found the key in time for Pope Francis to enter his new apartment. I wonder if Benedict XVI left him a little welcome note? In Buenos Aires he had a small flat in which he cooked his own meals. It is unlikely this flat has a kitchenette…. yet! 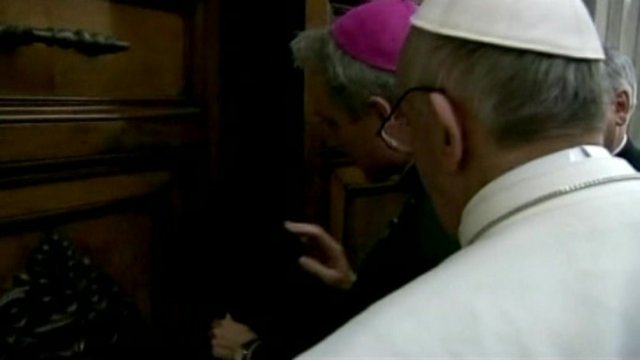 Pope Francis had a little stumble yesterday. The media pounced on it. Some treated the media response with the scorn it deserved. No picture of it here. So an old man, sitting on an unfamiliar chair in an unfamiliar place, doing unfamiliar things, forgets the chair has a step and so has a little wobble. Piffling trifle. Let’s move on.

Pray for the Pope. You can use Leo XIII’s prayer:

O Lord, we are the millions of believers, humbly kneeling at Thy feet and begging Thee to preserve, defend and save the Sovereign Pontiff for many years. He is the Father of the great fellowship of souls and our Father as well. On this day, as on every other day, he is praying for us also, and is offering unto Thee with holy fervour the sacred Victim of love and peace.

Wherefore, O Lord, turn Thyself toward us with eyes of pity; for we are now, as it were, forgetful of ourselves, and are praying above all for him. Do Thou unite our prayers with his and receive them into the bosom of Thine infinite mercy, as a sweet savour of active and fruitful charity, whereby the children are united in the Church to their Father. All that he asks of Thee this day, we too ask it of Thee in unison with him.

Whether he weeps or rejoices, whether he hopes or offers himself as a victim of charity for his people, we desire to be united with him; nay more, we desire that the cry of our hearts should be made one with his. Of Thy great mercy grant, O Lord, that not one of us may be far from his mind and his heart in the hour that he prays and offers unto Thee the Sacrifice of Thy blessed Son. At the moment when our venerable High Priest, holding in His hands the very Body of Jesus Christ, shall say to the people over the Chalice of benediction these words: “The peace of the Lord be with you always,” grant, O Lord, that Thy sweet peace may come down upon our hearts and upon all the nations with new and manifest power. Amen.

Well, not quite births in the monastery. Rather, births among its flock… of sheep, that is. Yesterday twin sister lambs, Eva and Zsa Zsa, were born (pics get bigger if you click them). 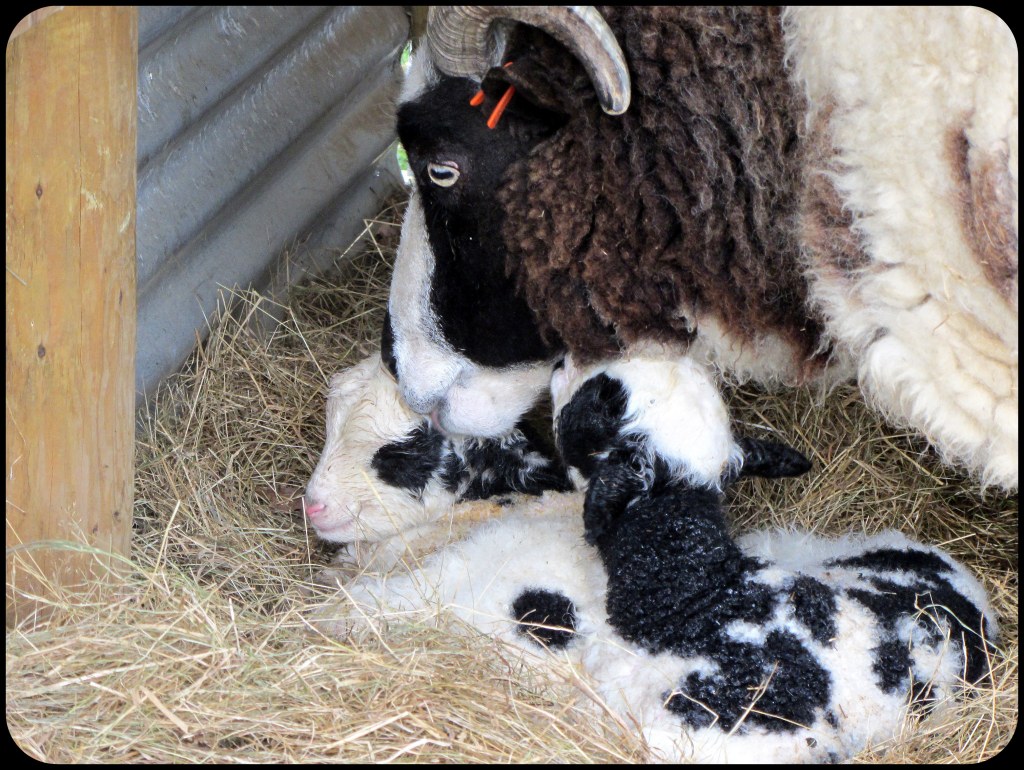 Mother busied herself for a long time indeed giving the little girls a makeover.

This ewe lost both her twins last year when they emerged together. This confused her and she only managed to get one free of its birth sac, and then only belatedly. The encased one died before I arrived, and the second never recovered from the trauma and died not much later. This year, things worked to plan. I arrived shortly after Eva was born, and she was already clear of the sac, on her feet, and feeding. Having dashed back in for lunch, I returned to find Zsa Zsa had been born, and was also on her feet though having some trouble finding the teat. About Compline time it began to snow and I had fears for the lambs on this chilly first night for them. 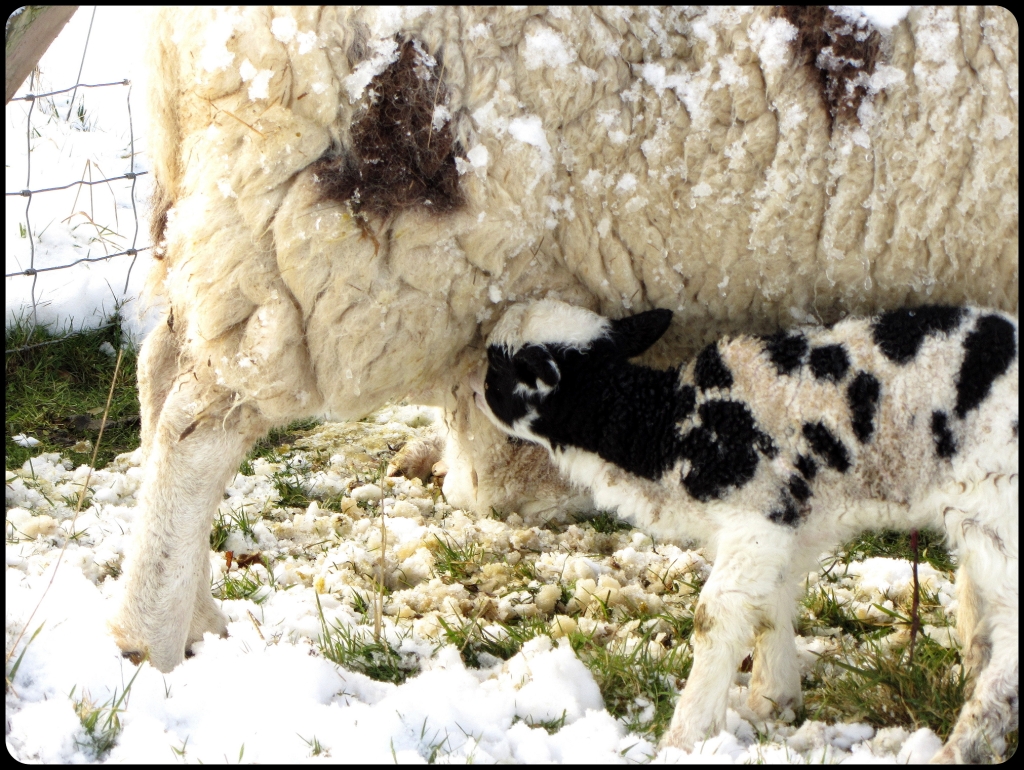 In all the lambs seem to be in good form. In fact, they are rather enjoying the attention from the paparazzo.

Last night we had enough snow to blanket the earth in a soothing veil of white, fitting on this feast of St Scholastica, Virgin and Nun. There are two “photo essays” of scenes around the monastery this morning. You can see them on the Tumblr page (which is much better suited to pictures).

If you would like a little joy to balance your Lenten penance... Just putting it out there...😏
A kind gift arrived today, leaving me spoilt for choice as to the first holy distraction. Do check out Arouca Press' rich, unique, traditional but non-polemical catalogue which is always very decently priced.
Lest we forget.
We might have to rename this gate as the Penitents' Gate...🤔
Resuming confessions this morning, in a Covid-compliant confessional.
Scacciadiavoli.