If you read here regularly (and my thanks to both of you!) you might remember that I spent a little time looking at the ecumenical reactions to Benedict XVI’s abdication. First I combined the reactions of a Lutheran, Russian and Greek Orthodox prelates and the leader of the Bruderhof (in the anabaptist tradition), and noted how remarkably positive they were, especially when compared to the venom dripping from some Catholic fangs. Then we looked at the official statement from Patriarch Bartholomew of Constantinople (the Orthodox ‘pope’ to put it very crudely and loosely) who wrote in unprecedented warm terms about Benedict, including this wonderful jewel:

We Orthodox will always honor him as a friend of our Church and a faithful servant of the sacred proposition for the union of all.

It seemed to signal that Benedict had furthered ecumenism much more than he was credited with by most commentators, and I hoped aloud that his successor could continue to build on this authentic and strong ecumenical foundation. Then Patriarch Kirill of Moscow, even more remarkably given the Russian Orthodox mistrust of the Roman Church, wrote in terms barely less fulsome, and he ventured to declare a hope:

I sincerely hope what developed during your active participation, a good trusting relationship between the Orthodox and the Catholics, will continue to grow with your successor.

So, imagine my stunned gaping when I saw a comment from the Restless Pilgrim alerting me to the fact that it has been announced that Patriarch Bartholomew will attend Pope Francis’ Mass of inauguration on Tuesday. This is BIG news. For the first time since the Great Schism began in 1054 the Patriarch of Constantinople, the acknowledged leading prelate among the Orthodox, will attend the enthronement of a pope. This is so immensely important I am speechless.

As discussed in an earlier post, the major obstacles to reunion between the Orthodox and Catholic communions of Churches are not essentially theological, though they certainly exist, but ecclesiological: the role of papal primacy in practice (for the Orthodox accept the principle already). While a brother priest among the Orthodox is not quite so upbeat about the theological differences, he highlights as the primary issue for now the need for mutual forgiveness between the two Churches before any theological reconciliation can be effected. Common worship is the sublimest forum for reconciliation and after almost 1000 years it seems to be upon us.

Benedict XVI has sown ecumenical seed of great richness; the opportunity now arises for Pope Francis to reap the harvest. Only God can give the growth of course, so let us pray for this encounter in worship on Tuesday. As the world grows ever more hostile to Christianity, the ancient churches should rightly seek to reconcile and confirm each other in Christian faith.

And if Patriarch Kirill will find it in his heart to come also next Tuesday, then I will renounce coffee till I die. This is so important that it is worthy of sacrifices that hurt. But for now, I will take what I can get. And Patriarch Bartholomew’s announcement is great gain indeed for us all. For now, I think I need a sherry… 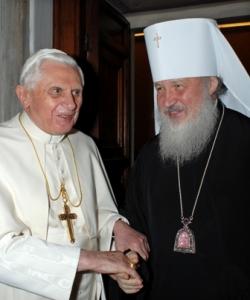 The Society of St John Chrysostom has translated the message sent by Kirill, Orthodox Patriarch of Moscow and All Russia, to Benedict XVI, on 1 March. Given that historically the Russian Orthodox have not had a whole lot of nice things to say about the Church of Rome, the warm and fraternal tone of this message is yet another example of the progress made in Benedict’s pontificate in the field of true ecumenism. Not so long ago this message would not have been conceivable. This follows after the equally warm message sent by Bartholomew, Orthodox Patriarch of Constantinople. Patriarch Kirill’s message is worth reading, because one day it will be seen as a little but significant piece of history.

In these exceptional days for you, I would like to express the feelings of brotherly love in Christ and respect.

The decision to leave the position of Bishop of Rome, which you, with humility and simplicity, announced on February 11 this year, has found a ready response in the hearts of millions of Catholics.

We have always been close to your consistent ministry, marked by uncompromisingness in matters of faith and unswerving adherence to the living Tradition of the Church. At a time when the ideology of permissiveness and moral relativism tries to dislodge the moral values of life, you boldly raised your voice in defence of the ideals of the Gospel, the high dignity of man and his vocation to freedom from sin.

I have warm memories of our meeting when you were elected to the Roman See. During your ministry we received a positive impetus in the relations between our Churches, responding to the modern world as a witness to Christ crucified and risen. I sincerely hope what developed during your active participation, a good trusting relationship between the Orthodox and the Catholics, will continue to grow with your successor.

Please accept my sincere wishes for good health, long life and help from above in prayer and in your theological writings.

With love in the Lord,

+ Kirill, Patriarch of Moscow and All Russia