Last night, as a result of a very kind and unmerited (by me) invitation, I had the enormous privilege of hearing His Eminence, Christoph Cardinal Schönborn OP, Archbishop of Vienna, speak at the National Gallery in London. I had the good fortune to team up with Dr Stephen Bullivant of St Mary’s University College, Twickenham, for the occasion. The evening began with wine and canapés Room 8, now The Dorothy and Michael Hintze Room, at the National Gallery. 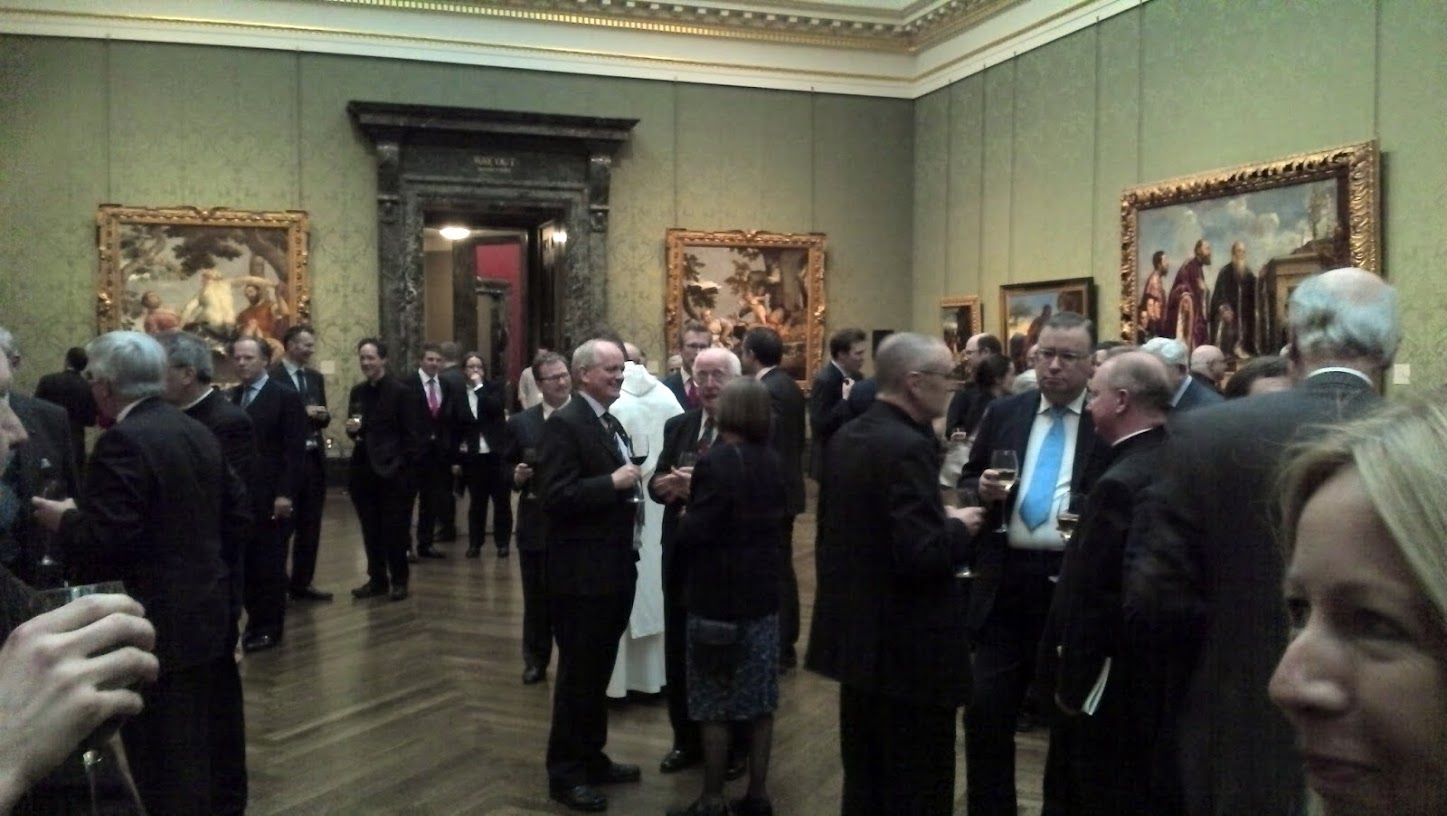 This was a felicitous siting of the pre-lecture gathering, and not just because this room holds some wonderful religious works from the Italian Renaissance, by such masters as Raphael and Michelangelo, but because Mr Michael Hintze, of the room’s new name, was in effect the host for the evening. Mr Hintze is a wealthy Catholic businessman who gives almost as much as he gets. Apart from a large benefaction to the National Gallery, he has also donated to the Church, not least to the restoration of frescoes in the Vatican’s Pauline Chapel. He is an alumnus of my old college, St John’s at the University of Sydney, where he recently funded the building of a new residential wing. He thoroughly merits the recognition he received when Pope Benedict XVI made him a Knight Grand Cross of the Order of St Gregory. He is one of that now-too-rare breed of wealthy people who share their wealth with good causes. Thankfully, they do exist – my invitation came through the kind services of another Catholic philanthropist, Mr Graham Hutton… but I digress.

So far I have not had the front to drop Douai Abbey’s name to Mr Hintze – our Library and Archive is still in need of money as it expands to encompass the archives of other monasteries and religious orders, and we could certainly do with a sacristy!

The great and the good present for the evening were way above my station, but I did recognise Lord Williams, until recently Anglican Archbishop of Canterbury and ecumenical confrater of Douai Abbey,  Fr Timothy Radcliffe OP, former Master General of the Dominicans, Mr Richard Fitzalan Howard of the Order of Malta, and Fr John Saward, the eminent theologian. There were a goodly number of younger Catholic servants of the Church present as well, and it all made for a lovely buzz of bonhomie and conversation.

Then, after a brief pitch by the Gallery director, we moved to the Theatre for the Cardinal’s lecture. His subject was the place of Christianity in an increasingly and predominantly secularised Europe. He spoke from notes, of which I do not have a transcript, though a copy of the speech would not have been adequate given that His Eminence made frequent asides and off-the-cuff remarks.

So I am largely working from a weak memory in what follows. What does stay clearly in the memory is that his lecture was accessible and insightful. He spoke mainly from a Germano-Austrian perspective, not surprisingly, but the relevance to all of Europe, including the UK, was obvious. He peppered his lecture with references to the thought and ministry of Benedict XVI, quondam Joseph Ratzinger. The Cardinal was a student of Ratzinger and the influence of Ratzinger on his own thought is explicit. Another feature which marked the lecture was the Cardinal’s strong emphasis on pro-life issues. He spoke frequently against euthanasia and abortion, occasionally as an impassioned aside.

His principal focus was not on a Europe facing the prospect of increased Islamization. Rather he focused on the more burning issue facing Europe, secularization. It was clear that the Cardinal saw the force of secularization as the greatest threat to European culture and society. He noted the reaction of one young Muslim to the attempts in many countries to marginalize or remove Christian symbolism and content from society: she had no objection to seeing a European country make explicit its Christian foundations – indeed it reassured her that she was in a society that believed in God in the first place. The attempt by some governments to de-Christianize European society in the name of pluralism actually offends a vast number of those they seek to placate. Apart from the militant extremist fringe of Islam, most Muslims would prefer a tolerant but explicitly Christian society over an atheistic, pluralist secular society any day.

The Cardinal also fired a warning shot across the Church’s bow on this matter. He saw a Church that in many places was conforming itself to the world, accommodating itself to its secular milieu. Such a Church, the Cardinal warned, would have nothing worthwhile to say to society, and in fact the world is far better at being secular than the Church: “A secularized Church is of no interest to a secularized world”. Amen.

One of his asides arose from his treatment of the recent controversy in Germany over infant circumcision, when there was an attempt to ban circumcision. The attempt arose from a denial that circumcision had a religious meaning, and was made in the name of preserving children’s “bodily integrity”. His Eminence then wryly noted the irony that this same deference to bodily integrity is not extended by these people to children not yet born.

The Cardinal’s approach to the issue of same-sex relationships was less robust, or one might say it was more nuanced. He felt that same sex-relationships were a fact in modern European and deserved “respect”. That seemed a little too generous. Certainly in civil terms they should be conceded tolerance: there is no room in Catholic teaching for what could legitimately be called ‘hate crimes’ (in contrast to the expression of an opinion which questions such relationships on moral grounds, so often illegitimately lumped in with ‘hate crimes’ and ‘homophobia’). However tolerance does not equate to respect, and in Catholic terms it is hard to see how to respect something that is more often than not contrary to Christian morality. That said, the Cardinal did mention that when visiting schools he is often asked why the Church opposed “gay marriage”. His reply is always to tell them that the Church does not oppose “gay marriage”, for it cannot oppose something that does not exist! The Cardinal was clear that while civil protections might be accorded same-sex relationships, there can be no question of same-sex marriage. On that point he was unequivocal.

When asked at the end of the lecture what he might have to say to families in light of what he had said about the promotion of life and of authentic marriage, the Cardinal offered a ready and succinct reply: “Grow and multiply”! In this exhortation, which he said was the first commandment we received from God and can be found on page 1 on the Bible, can be found a critique of the shockingly low European birthrate resulting from the contraceptive and abortion culture of modern secular Europe, as well as a reaffirmation that the health of both marriage and society lies in their openness to new life.

His Eminence’s acknowledgement of Benedict XVI’s teaching was frequently evident and explicit, and emerged especially at the end as he answered questions. In response to a question about ecumenism, His Eminence referred to the Ratzinger Schülerkreis, or holiday symposium, that Benedict XVI/Cardinal Ratzinger has held each summer with his former students for 33 years. Himself a former student, Cardinal Schönborn attends these, and least year’s was on ecumenism. At the end Benedict offered a sort of synthesis of and reflection on the opinions aired by his students. Benedict reflected that perhaps a new approach was needed to the ecumenical venture, one that put doctrinal issues in second place and put Christian witness in the first place. Cardinal Schönborn found Benedict’s proposal remarkable: that ecumenism today should focus first on how we can be Christians together and offer a common Christian witness to a largely hostile and secularized society. The corollary becomes clear with a little thought: there will be no ecumenical progress of substance until Christians can unite in what they have in common: obedience to Christ’s principal commandment of charity and of moral living. Only when we live and act like Christians will we offer anything like a true Christian witness to the world, and only then can we talk fruitfully about the doctrines that separate us. Without the common ground of Christian witness in action ecumenical dialogue has no firm ground on which all parties can stand. While there can be no true love without truth, he seems to suggest that if we concentrate on love first, the truth will make itself clear as a result.

His Eminence also offered an interesting insight in relation to the new pope. Rather than set Pope Francis against Pope Benedict as the secular media and certain elements in the Church are trying to do, the Cardinal said that he saw it quite clearly that Pope Francis is a living “illustration” of the teaching of Pope Benedict. What Pope Benedict taught, Pope Francis is embodying with crystal clarity. In the is light, it is as if the election of Francis was divinely delayed so that the ground for his ministry could be laid in the profound yet accessible teaching of Pope Benedict. Pope Francis himself has made abundant reference to Benedict in his first few weeks. Even Pope Francis’ reluctance to speak about the Second Vatican Council could be seen to reflect Benedict’s call to rediscover the true Council; Pope Francis will engage in this task more by actions than by words. Pope Benedict has provided all the words and tools of thought necessary already.

Talking after the lecture with Fr John Saward, he made the point that even Pope Francis’ general liturgical style could be said to reflect Benedict’s essential teaching on the centrality of Christ and his Cross in the liturgy, as opposed to an unhealthy focus on priest or people. Pope Francis has maintained the Benedictine altar arrangement as far as I can tell, and even his resumption of the Scorzelli papal staff, introduced by Pope Paul VI but made famous by Blessed John Paul II, can be seen to reflect Pope Francis’ repeated emphasis on Christ crucified at the heart of the liturgy, and of the Church herself. In this emphasis he is at one with Benedict. So too his relative sobriety in vesture can be seen as attempting to take the focus off the celebrant. It is a method not everyone might approve but it is at least consistent with his theology. It is an insight that should colour our interpretation of Pope Francis’ spare liturgical style.

May the Lord uphold Cardinal Schönborn in his episcopal ministry in the very difficult environment of modern Austria.

**It was a great way to make a long-overdue first visit to the National Gallery.**

**PS I have received a couple of emails that make me realise I have been a little tough on Archbishop Marini. For one thing, it is true that sometimes one has to wear what is provided in the sacristy. This was apparently the case with the blue and yellow horrors shown in the picture in my post on the two Marinis. This is what was provided by the organisers at Mariazell, not by Archbishop Marini. Fair enough. However, given that Pope Francis is making very clear choices of his own in liturgical vesture, this will be an excuse that might not hold for much longer! There are other issues at which I find myself at odds with Marini primo, but no one can question the lengthy and devoted service he rendered as papal MC.**