Ever so quickly as I should be working on some conferences, but this had to be remarked.

It did not take long. Pope Francis has not even been enthroned yet and some cardinals are laying daggers into Benedict; as he is no longer pope and his successor is in plain sight, he is now fair game it seems.

The first shock was to read, after a tip off, Cardinal Mahony’s Twitter page. It is beneath my dignity to link directly to it, but here is the string of tweets (going from last to first) in question:

At our meeting today with Pope Francis, I noted that is still wearing his older black shoes. I pray that he keeps them as a sign for us all

Mass with Pope Francis: moving from HIGH Church to LOW and humble Church! What a blessing that we are encountering Jesus without trappings!

Don’t you feel the new energy in the Church, and being shared with one another? We will experience a new Pentecost as the early Christians.

Snide remarks from an objectionable man. A man who clearly covered up with full intent and awareness the criminal sins of so many of his priests that he was forced to pay out US$660 million in one settlement alone to bring the lawsuits to a speedy resolution before people tried to see all the files, which as we know he steadfastly refused to hand over to police. Now there can be good reasons for that, but we know now his reason: to kide his clear and culpable complicity. This is not a case of a naive bishop trying to keep everyone happy. Far from it.

And this is a man who built a monstrosity of cathedral costing a king’s ransom, but who derides Benedict wearing the nicer things already in the papal wardrobe.

This is a man who “Religious Education” conferences gave a happy home to heresy for years, and the liturgies at which were often nearly pagan, and more often sacrilegious.

Compare him to Cardinal O’Brien who sinned when in his cups, years ago, with adults, and not that seriously. He withdraws from the conclave voluntarily, issues a short but abject apology, and then bows out to keep silence. Mahony has not apologised, went to the conclave despite the thousands of Catholics who begged him not to, has cast the blame on others and likened himself to a martyr and even to Christ, and who whined like a spoilt brat when his successor in Los Angeles withdrew permission for Mahony’s active ministry! The shamelessness of his snide remarks aimed at Benedict is appalling. Pray for him. 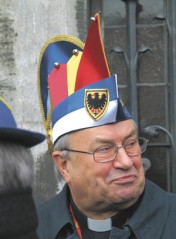 And Cardinal Lehmann has criticised Benedict for not having revealed all the contents of the Vatileaks enquiry to the cardinals. Instead, Benedict left the dossier for his successor to act on.  He says Benedict’s approach “could be misinterpreted”, which it seems is what he is deliberately doing.

But a modicum of rational thought will enable even the Cardinal to see that Benedict had no choice. If he had revealed all, he would no doubt have embarrassed some cardinals present just as they were about to enter conclave, and left a nasty mess for his successor to clear off as he flew away into the sunset. Benedict had the sense, considerateness and courtesy to leave his successor with a totally free hand in deciding what to do with the report. The Curia is the pope’s domain, and not that of a self-important, over-reaching and grandstanding diocesan bishop. Let him deal with his own diocese, which from memory has a few problems of its own.