One of the brethren pointed out to me an article in the May-June 2017 edition of Doctrine & Life. The article is by the Irish Dominican Liam Walsh. I am assuming this is the same Fr Liam Walsh OP who contributed to the fascinating book Vatican II: The Liturgy Constitution (1964) edited by Fr Austin Flannery OP. He refers to “a Benedictine monk” his correspondence in The Tablet last year regarding the Mass as meal. His discretion is no doubt because he takes issue with what the monk wrote in his brief letters. That monk was I. Here is the relevant page from Fr Walsh’s article:

Since Doctrine & Life does not have a letters page I shall answer Fr Walsh here.

His principal conclusion from what I wrote is not entirely logical. My point had been to state clearly that the Mass was not a re-enactment of the Last Supper (as the Protestants maintain) but a making present of the Sacrifice of the Cross. Fr Walsh’s tentative conclusion that “[t]he rest of the Last Supper might then seem to be irrelevant to the Eucharist” is a inference he might wish to draw but which I do not.

It is in the nature of letters’ pages that one must be brief, pithy and economical in expression if one hopes to be published. For that very reason a comprehensive and multifaceted treatment of a subject is impossible. The purpose of the letter is to address the point at issue. The point was the modern obsession with making the Mass into a meal. This approach, entirely Protestant, has implications for the content and mode of celebrating the Mass. If one thinks one is re-enacting the Last Supper then things like facing the people, replacing the altar with a table, loaves of bread and glass beakers of wine, meaningful inflections of voice and equally meaningful eye contact become desirable.

If the Mass is actually the re-presentation of Christ’s sacrifice then facing the Father, to whom the sacrifice is made, is more important; as also keeping an altar rather than a mere table. I do not wish to labour the issues as Church teaching is quite clear. Yet we might keep in mind a few salient points.

Interestingly there was an attempt by Bugnini and his Consilium crew to prefer the meal to the sacrifice in the General Instruction of the Roman Missal itself, the great theological foundation of the post-conciliar Mass. As so often, he employed studied ambiguity. He got many things past Paul VI but this he did not get past. In the original 1969 version article 48 read:

Christ instituted the memorial of His death and resurrection at the Last Supper. This is continually made present in the Church when the priest, representing Christ, carries out what the Lord did. When He instituted the paschal sacrifice and meal, He handed it over to his disciples for them to do it in His memory.

The obvious interpretation of this wording is that it is the Last Supper that is made present in the Mass. But article 48 was revised in 1970, and became (changes in bold):

Christ our Lord instituted the paschal sacrifice at the Last Supper. In this the sacrifice of the Cross is continually made present in the Church whenever the priest, who represents Our Lord, does what Christ Himself did and commanded his disciples to do in memory of Himself.

This is a clear and unequivocal prioritisation of the Sacrifice of the Cross in the Mass.

Article 55 also required remedial work between 1969 and 1970, to repair the errors that prioritised the meal over the sacrifice in the Mass. Thus in 1969 it read:

The Last Supper is made present in the words and actions of Christ when He instituted the sacrament of His Passion and Resurrection, when under the appearances of bread and wine He gave His Apostles His Body to eat and His Blood to drink and commanded them to carry on this mystery.

Along with the error that the Last Supper “is made present” at Mass, is the clumsy assertion that the Mass makes present also the Resurrection as well as the Passion and Death of Christ. Thus in 1970 a correcting hand is found to have been at work (no need for bold as it has changed entirely!):

Through the very words and actions of Christ there is accomplished the very sacrifice which He Himself instituted at the Last Supper when he offered His Body and Blood under the appearances of bread and wine, and gave them to His Apostles to eat and drink, and commanded them in turn to perform this sacred mystery.

One does not need to be a theologian to see how massive has been the change: the “words and actions of Christ” make present not “the Last Supper” but rather “the very sacrifice He Himself instituted at the Last Supper“. This is in the very document that offers the intended theological understanding of the new Mass: it is the Cross made present not the Last Supper.

Despite these revisions Paul VI saw that the General Instruction was still problematic. So the pope insisted on a Foreword to the General Instruction in 1970 in order to ensure the correct interpretation of the ambiguities to follow. One might ask why not remove all the remaining ambiguities (eg article 7), but that is another issue. The Foreword is clear enough that while the rites have changed their meaning has not (my emphases):

Thus in the new Missal the Church’s rule of worship corresponds with her unchanging rule of faith. From this we learn that the sacrifice of the Cross and its sacramental renewal in the Mass are, apart from the difference in the manner of offering, one and the same sacrifice; it is this sacramental renewal which Christ the Lord instituted at the Last Supper and commanded His Apostles to celebrate in His memory. The Mass is therefore a sacrifice of praise, of thanksgiving, of propitiation, and of satisfaction.

Thus the post-conciliar Mass’ own official interpretation and explanation make it abundantly clear that the Mass remains a sacrifice above all else, and not just a sacrifice of praise and thanksgiving (up to which point many Protestants could happily agree) but also a sacrifice of propitiation and satisfaction, by which the sins of man are atoned for and made good in the Body and Blood of Christ.

If any celebration of the Mass is not this, it is not the Mass. 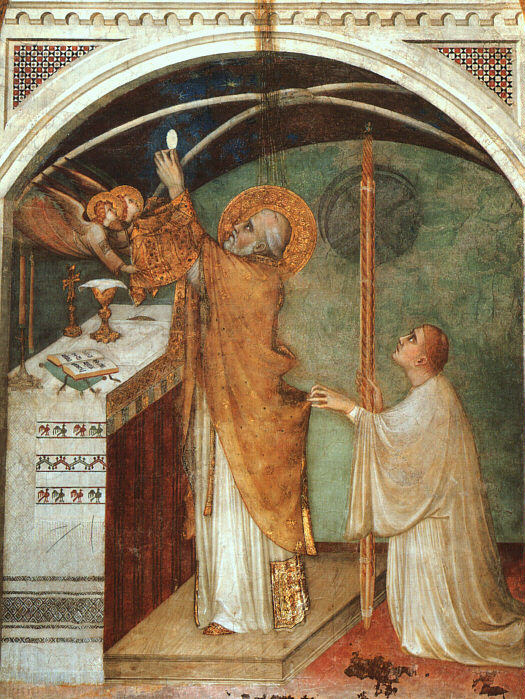 9 thoughts on “The Mass: Meal, Sacrifice and Errors Corrected”