To the best of my knowledge there is no monastic blogger (mogger?*) at Downside Abbey. [*I guess a clerical blogger is a clogger.] Which is a pity. For there is so much about Downside that is worthy of sharing with a wider audience on social media.

Today is the anniversary of the death of Dom Hubert van Zeller (†1984), a far-from-boring monk of Downside, whose prodigious talents have given joy to many a monk, though perhaps some heartburn to an abbot or two. He was very gifted sculptor, with a clean and distinctive style that breathes the air of Ditchling. He was a popular spiritual writer whose works are still in print. Yet for some of us who were not his immediate brethren at Downside, he is most memorable for his books of caricatures published under the pseudonym Br Choleric.

The Br Choleric Cracks series of books—Cracks in the Cloister (1955), Further Cracks in Fabulous Cloisters (1957), Last Cracks in Legendary Cloisters (1960), Posthumous Cracks in the Cloisters (1962), Cracks in the Curia or Brother Choleric Rides Again (1972), Cracks in the Clouds (1976, under his own name not the pseudonym)—span a period of great turmoil in both Church and cloister, and the tenor and tone of these books mirror the march of progress both of the changes afoot and in the author’s reactions to them. Over these 21 years “Br Choleric” moves from affectionate and amused tolerance to thunderous disapproval. As the changes in the Church increasingly intruded into the life of the cloister so too his gaze moves from the cloister to include the wider Church in the world. In all of them his powers of observation are matched with his sense of humour and his skill as a caricaturist.

Below is a page from each book, in chronological order, that hopefully will give you a sense of the movement in Dom Hubert’s mood in this time of change:

The increasing note of sadness, even anger, is not hard to detect if you read these charming books. 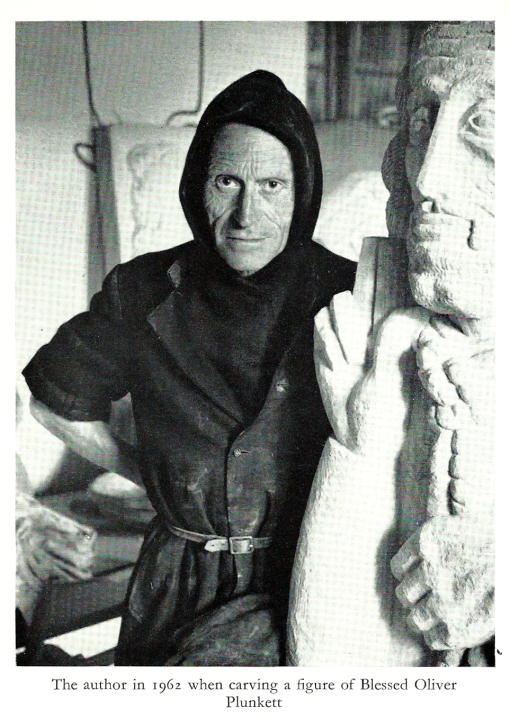 Dom Hubert—Brother Choleric—was a severe looking man with what was, quite probably, an angular personality. One wonders if he found it hard to settle at a time when settling was a tall order in the life of the Church. He spent time as a convent chaplain as well as a good decade or so in the USA, which I suspect had at least something to do with finding his monastery unsettling, and perhaps his monastery finding him unsettling. He deserves a biography.

On 7 March 1970 a letter to the Editor from him was printed in The Tablet. His pain is evident, as is his essential monastic and priestly commitment. It makes me sigh a little on his behalf. May he rest in peace.

THE FALLACY OF CHANGE
From Dom Hubert van Zeller

Sir. In case my letter about the changes in the Church should cause others besides Mr. Bretherton (The Tablet, 14 February) to have misgivings about the quality of my obedience, I would like to say that I accept absolutely the Holy Father’s ruling about the new form of the Mass. I accept his decision about this as I accept without question his decision about the pill or about the celibacy of the clergy. My criticisms are not levelled at the Pope but at the people who have taken advantage of the liberty left by the Pope in liturgical matters, and who have, over the past few years and with the unhappiest results, experimented. It is not Rome’s fault that permission to use the vernacular has been abused and that hymn-singing has in most churches ruled out the possibility of silent prayer. My own preference, I admit, is for the old rite and for the traditional language, but I hope I shall be allowed to go on saying a daily Mass until the end of my days—even if it has become for me more a penance than a prayer. Since the Mass is essentially a sacrifice, and one which invites a corresponding sacrifice on our part, I am quite ready to do without recollection and even peace of mind if this is what God wants. God evidently does want it or he would not have spoken so clearly through his appointed authority.

One thought on “Br Choleric – RIP”