Yesterday the Holy Father received in audience Archbishop Piero Marini, the previous papal MC (Marini primo). In 2007 after 2 years as Benedict XVI’s MC, and 18 years before that as Blessed John Paul II’s, Marini primo was moved to a curial position, and in his place a young Genovese monisgnore was appointed, Guido Marini (Marini secundo).

Marini primo was apt to dress Benedict XVI like this: 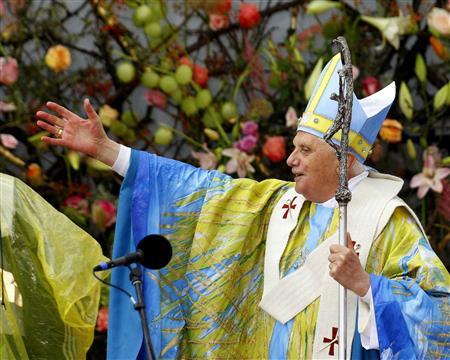 Whereas Marini secundo was apt to dress the pontiff like this: 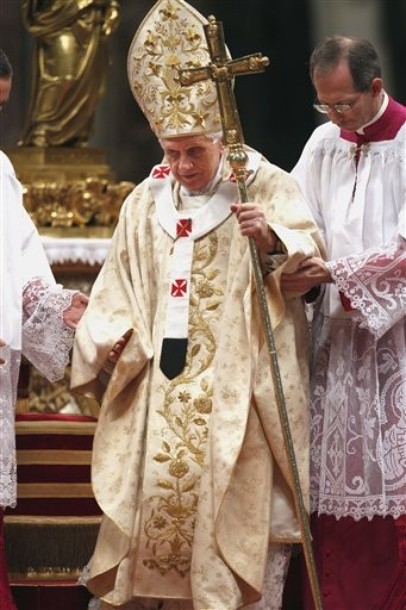 Needless to say, this audience Pope Francis granted to Marini primo yesterday has set liturgical teeth on edge. Given Pope Francis’ rather Jesuit, graceless approach to matters liturgical, is Marini secundo about to be removed and his predecessor restored? Marini primo is not a bad man to the best of my knowledge, but his taste leaves a lot to be desired. Moreover, his appointment might be counterproductive in light of Pope Francis’ agenda for simplicity and poverty. Marini primo was fond of spending money to make innovative liturgical fashion statements; Marini secundo was happy to look first to the papal sacristy and see what was already in stock. Anyway, time will tell…

There are many around who resent money being spent on the liturgy, with the inevitable refrain that it would be better spent on the poor. Apart from being a simplistic argument, and one that is not easily reconcilable with our Lord’s own words (Matt 26:6-13 comes to mind), it is often found to be contingent on the way it is being spent. If for modern vestments or architecture, then it can be praised as modern, part of adapting Christianity to the contemporary society and taste &c, and any objections quickly forestalled; but if for traditional-style vestments, buildings or fitments, then it becomes costly indulgence in nostalgia, “dressing up” &c. Monasteries are not immune from it. It is a mindset wholly alien to a true Christian spirit, and one certainly incomprehensible to eastern Christians, not least those who live in much poorer countries than ours. They tend to sacrifice much for the sake of their liturgies.

So when one finds an ecclesiastical craftsman who fosters intelligent liturgical tradition without stooping to nostalgia or kitsch, he (or she) is to be encouraged in every way possible. One such can be found at the Australian St Bede Studio. This is not mass produced material, but hand-crafted beauty. During the papal visit for Sydney’s World Youth Day in 2008 (where has the time gone?) Michael at the Studio was commissioned to make vestments for Pope Benedict’s visit, and this was the stunning result: 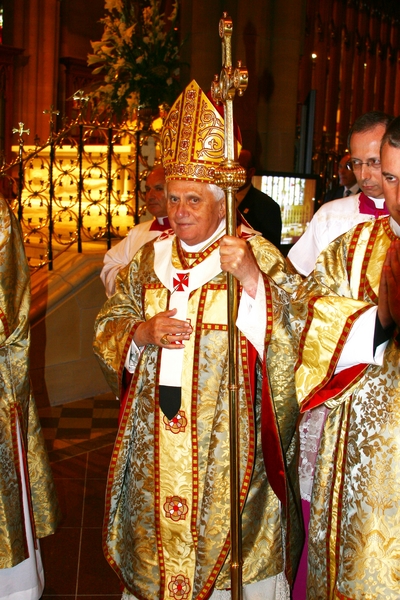 It is a traditional vestment which does not slavishly ape any one period. It is a full cut chasuble of unostentatious beauty. Its use of the tau cross I find particularly attractive. The Studio makes vestments of many styles, always with an eye to beauty, good taste and quality. If I had the money I would stock our meagre sacristy with Michael’s work without a second’s hesitation!

Yes, Michael also has a blog which is very informative. Rather than being a mere vehicle to advertise his work, it offers restrained analysis and background on styles of vestments and the ways in which they employed. Recently he has been looking briefly at Pope Francis’ liturgical style. It is a blog you should visit if you value the liturgy and its worthy celebration. You will discover that Michael is a true and serious student of liturgy. Go there now! The Saint Bede Studio Blog

20 thoughts on “Liturgical darkness and light”