It the nature of an interregnum to produce a power vacuum of greater or lesser effect. In the absence of the authority figure, many start jockeying to advance their own cause, or to influence the accession of the new figure of authority. There is something inevitable about it; but there can also be something mischievous too. Mischief is sued not in the common idiomatic sense of naughtiness, but in its more sober sense of harm or trouble.

An example of such mischief in the wider Church – the macro-ecclesial level (!) – is the irrepressible and amazingly long-lived Hans Küng, self-appointed prophet for the spirit of Vatican II. The Swiss theologian, who has long since lost his right to teach as a Catholic theologian though he remains technically a priest in good standing, is a contemporary of Joseph Ratzinger and, with his more illustrious colleague, a peritus at the Council. As theologian, cardinal and pope, Ratzinger has promoted what the Council actually said, in the light of the continuous tradition of the Church. Küng has championed what he wishes the Council had said, under the camouflage title of “the spirit” of Vatican II, as if the Council has a life outside its officially agreed texts.

Küng is materially a heretic. This is not name-calling but calling a spade a spade. He denies dogmatic Church teaching, and is recalcitrant in that pose. And he is not animated by love of the Church. I remember when I was a baby Jesuit in Australia back in the late 80s. Living with us and teaching elsewhere was a wonderful theologian, a disciple of another and great Jesuit theologian of the 20th century, and who had studied in America in the 1960s. He spoke once of joining the throng to hear Küng speak in Washington, since he was one of the biggest names among the bright young theologians. This Jesuit came away not satisfied or enthused, but disturbed. Küng, he said, spoke with hate not love.

That seems to be confirmed in Küng’s latest diatribe in the New York Times, on 28 February (no link – it is not worth the time). He begins by asking if the Arab Spring that has toppled so many autocratic regimes might reach the Vatican and produce a Vatican Spring. So there you have it: the opening words liken the papacy to an autocratic regime on a par with the brutally repressive regimes now falling (though not always with happier results!). Küng then moves to tone it down by adjusting his comparison to that of absolute monarchies. But, as if a disciple of Goebbels, he knows how the rhetorical devices of effective propaganda. By beginning with the shocking comparison, it will remain in the readers’ minds no matter how much he later modifies it. Of course, it is an insult to those who do live under truly repressive regimes, quite apart from the insult to Benedict XVI, against whom Küng has turned with the venomous fury of the fabled woman scorned. If Benedict were truly repressive, Küng would have been banished to a remote monastery decades ago, or failing that, excommunicated. If only…

It gets no better. Küng traces the sins of the modern papacy to Gregory VII’s reforms which, he asserts, introduced, among other things, “compulsory clericalism”. He does not explain this startling assertion, which is just as well as it is such a rhetorical flight of fancy as to rank with the latest products coming from North Korea. Not sure what I mean? Watch this:

Küng soon moves to the topic dearest to his heart, himself. How else does one read this remarkable passage:

In 2005, in one of Benedict’s few bold actions, he held an amicable four-hour conversation with me at his summer residence in Castel Gandolfo in Rome. I had been his colleague at the University of Tübingen and also his harshest critic. For 22 years, thanks to the revocation of my ecclesiastical teaching license for having criticized papal infallibility, we hadn’t had the slightest private contact.

Before the meeting, we decided to set aside our differences and discuss topics on which we might find agreement: the positive relationship between Christian faith and science, the dialogue among religions and civilizations, and the ethical consensus across faiths and ideologies.

For me, and indeed for the whole Catholic world, the meeting was a sign of hope. But sadly Benedict’s pontificate was marked by breakdowns and bad decisions. He irritated the Protestant churches, Jews, Muslims, the Indians of Latin America, women, reform-minded theologians and all pro-reform Catholics.

So Benedict’s meeting with Küng a sign of hope for the whole Catholic world. That’s how important Küng is, of course. Then the venom really comes out, and with it the lies:

The major scandals during his papacy are known: there was Benedict’s recognition of Archbishop Marcel Lefebvre’s arch-conservative Society of St. Pius X, which is bitterly opposed to the Second Vatican Council, as well as of a Holocaust denier, Bishop Richard Williamson.

There was the widespread sexual abuse of children and youths by clergymen, which the pope was largely responsible for covering up when he was Cardinal Joseph Ratzinger. And there was the “Vatileaks” affair, which revealed a horrendous amount of intrigue, power struggles, corruption and sexual lapses in the Curia, and which seems to be a main reason Benedict has decided to resign.

Let’s be clear. Benedict did not recognise the Lefebvrian SSPX; he lifted the excommunication of its four illicitly-ordained bishops, and did so as an act of mercy and to promote ongoing dialogue with Lefebvrists with a view to reconciliation. Now if Küng had been excommunicated (and he did more than merely “criticize” papal infallibility) his screams and howls would still be echoing. But for those whose views are exactly opposite of his, excommunication is the just penalty. No dialogue for them, no mercy, no tolerance. And to say that Benedict recognised the “Holocaust denier, Bishop Richard Williamson” is a slander so deliberate as to be diabolical. It is the propagandist’s craft in all its sick glory: defining the clearly-deplorable Willamson purely by one of his more distasteful opinions. When Küng finally dies, and the Church grants him a Catholic burial, will that mean the Church approves all his opinions?

Enough of this man. His scurrilous slur that Benedict was largely responsible for covering up the sexual abuse scandal has been so comprehensively disproved that his regurgitation of it can only be malicious in intent. You get the idea. He is making mischief, and if not trying to influence the cardinals in their choice, he is certainly using this interregnum to condition the reception that will be accorded to their choice:

If the next conclave were to elect a pope who goes down the same old road, the church will never experience a new spring, but fall into a new ice age and run the danger of shrinking into an increasingly irrelevant sect.

The growing throng of committed young Catholics, and a the myriad of us not so young too, might have a different idea of where the “shrinking… increasingly irrelevant sect” is to be found. 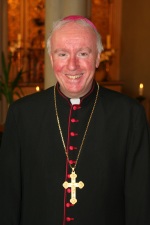 On the micro level we might look at the restructuring of the diocese that is being undertaken by Bishop Philip Egan of Portsmouth, my monastery’s diocese. The summary document can be found here. Many of the measures to be implemented which will reorganise and slim down the diocesan bureaucracy have dominated attention, much of it negative. One of the features is the abolition of certain departments, such as Pastoral Formation, with the task of catechesis now being overseen by a new and wider-ranging Vicariate for Evangelization.

The Bishop’s actions are being cast by some in the worst possible light. And again, it is mischief. Much of it has been found in the neo-Anglican journal, The Tablet. Again, rather than link to them, you can get a flavour of things from this page. For example:

Bishop Egan makes it clear that one of the objectives of re-structuring the diocese is to return responsibility for formation and catechesis to the local level of pastoral areas and parishes. Regarding the diocesan role of laity the report states that the three committees of trustees will comprise four members– two clergy, two lay – together with other co-opted members who bring particular expertise.

But The Tablet’s hatchet job on Bishop Egan’s and the trustees thoughtful and simple plan to re-establish subsidiarity to the parishes makes no mention of these review findings, instead it reports alarmist assertions from Fr Sean Tobin and Dr Keith Chappell that Bishop Egan is seeking to downplay the role of the laity.

‘In his parish newsletter, Fr Sean Tobin, parish priest of the Churches of Our Lady, Fleet, with Holy Trinity Church, Cookham, Berkshire, paid tribute to the department for “enabling parishioners to explore and grow in faith”. He told The Tablet that a number of parishioners were upset about the redundancies and that he was worried about who would undertake the work of forming catechists after the loss of the department. […]Under the plans, the department for pastoral formation will be replaced by a department for the New Evangelisation, which will come under a vicariate for evangelisation and will be run by a priest.  Fr Tobin said: “There is a lot of frustration from people as they recognise the great work the department has done over the years. My frustration is over what it says about the role of the laity and the role of the department. There was also not a lot of recognition from the diocese over the work the department has done over the years.” He added that two of his parishioners were among those who had lost their jobs.’

So, the Bishop is reducing the role of the laity. Shock horror. But is he? Lay trustees are still there overseeing the vicariates with clerics. Isn’t the real aim to have clergy and laity working together for the good of the Church, not one assuming “power” over the other? (Beware the hermeneutic of power in any discourse on the role of the laity.) In fact, the Bishop has, to employ unwillingly this power hermeneutic, taken away the power of a few elite lay people in the diocesan bureaucracy and handed it back to a larger number of lay people at the parish level, where the work of catechesis is actually done.

But for a truly comprehensive demolition of the mischief The Tablet is fostering, go read Dr Shaw’s analysis. Particularly interesting in his insight into the self-contradiction inherent in the position take by the Tabletistas. They abhor the alleged centralising of general power in Rome, but support the centralising of local power in diocesan bureaucracies. They demand the Vatican give power to the laity and take it from a clerical elite, but oppose the giving of catechetical responsibility to the laity in parishes and away from a salaried lay elite at diocesan level. Please read Dr Shaw’s piece on his blog. It exposes the mischief clearly.

As the conclave fast approaches, and as we begin to look forward to the end of this interregnum, let us pray all the more fervently that the cardinals elect the pope we need and God wants, and not the man (if he exists) sought by the mischief makers.

11 thoughts on “Mischief, macro and micro: a pre-conclave distraction”