Now that Benedict’s abdication has taken effect, and as the cardinals gather to prepare for the conclave, the murmuring of those critical of Benedict’s decision are getting a little louder. Cardinal Pell voiced the fears of many that an abdication might place future popes under unprecedented pressure to abdicate in the face of loud secular or even curial opposition. There is more from the rumour mill that the cardinals are resolving to insist that the new pope undertake never to resign. Cardinal Dziwisz’s comments on Bl John Paul II’s reigning till death even when illness had made him a mere shell of the man he had been – “One does not come down from the Cross” – have been mischievously construed by the press as an attack on Benedict.

Benedict XVI seems himself to have been conscious of Dziwisz’s words and of Bl John Paul II’s example. In his final audience last Wednesday he said,

I do not return to private life, to a life of travel, meetings, receptions, conferences, and so on. I am not abandoning the cross, but remaining in a new way at the side of the crucified Lord.

Bl John Paul II was a unique man, and Benedict XVI knows this better than anyone else. Benedict knows he cannot be another JP II. Benedict XVI is himself a unique man. He recognizes his own gifts and weaknesses and acts accordingly. Part of the reason why JP II was able to carry the Church and the world with him in those anguished last years if his pontificate was that he had been pope for the best part of a generation. His extrovert, warm personality and his gift for commanding the world stage as a personality to be reckoned with, meant that we could only feel sympathy for him as he battled on valiantly. Our sympathy was not dimmed by the knowledge of many of us that aspects of the governance of the Church were suffering even as JP II gave wonderful witness of the value of human life and human suffering as a sharing in the Cross of Christ.

Benedict proposes another rich identification we can make with regard to the Cross. He sees his life now not as being on the Cross with Christ, but standing by the Cross, at the feet of Christ. In this he seems to identify with Mary and the Beloved Disciple. who stood by the Cross after most had abandoned him.

Here one fruit of the Cross is highlighted: from the Cross Christ gives us a home, with his mother, a motherhood that is exercised by the Church. Benedict’s teaching to us is that by being in the Church we have begun to make the Cross the cornerstone (to mix images) of our lives. Benedict feels himself too old and unfit to the immense task of guiding the Church in such demanding times, which is itself a sharing in the Cross. Instead he is embracing the Cross in a more contemplative, less active way, standing by it and gazing upon it, attentive to its message. 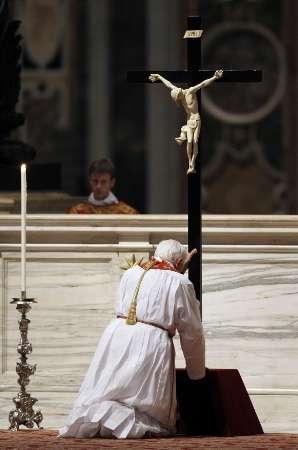 Benedict XVI has chosen to be cloistered with the Cross for the rest of his days. He reminds us that whether we feel ourselves to be in the Cross with Christ, or simply standing in its shadow, always the Cross is central to the life of a Christian. In fact, without the Cross there is no Christianity, and there is no Church. We are all called to shoulder the Cross, like Simon of Cyrene, at some stage of our lives. We are also all called to keep our gaze firmly fixed on the Cross, as we stand in its shadow.

To be in the Church is to abide in the shadow of the Cross. Benedict XVI has not strength enough now to carry the Cross as he formerly did. It is enough for him to remain in its shadow, his eyes undistractedly fixed on the Cross in the cloister of Golgotha. That too is a gift to the Church. Maybe, just maybe, as one has suggested to me, Benedict’s example might inspire more young men and women to embrace the contemplation of the Cross in the cloisters of the Church’s monasteries. What rich fruit that would be indeed.