Today the Church honours the Blessed Virgin’s birth to the fullness of eternal life, body and soul. What she is now, at the Last Day we shall be too if we choose it. While not explicitly taught in scripture, it is consistent with scripture (much like the dogma of the Trinity). The Venerable Fulton Sheen offers some insights on the fittingness of the dogma of the Assumption, not using scripture directly but employing an argument suffused with scripture. It is a better thumbnail explanation of the Assumption than most.

In Mary there is a triple transition. In the Annunciation we pass from the holiness of the Old Testament to the holiness of Christ. At Pentecost we pass from the holiness of the Historical Christ to the holiness of the Mystical Christ or His Body, which is the Church. Mary here receives the Spirit for a second time. The first overshadowing was to give birth to the Head of the Church; this second overshadowing is to give birth to His Body as she is in the midst of the Apostles abiding in prayer. The third transition is the Assumption, as she becomes the first human person to realize the historical destiny of the faithful as members of Christ’s Mystical Body, beyond time, beyond death, and beyond judgment.

Mary is always in the vanguard of humanity. She is compared to Wisdom, presiding at Creation; she is announced as the Woman who will conquer Satan, as the Virgin who will conceive. She becomes the first person since the Fall to have a unique and unrepeatable kind of union with God; she mothers the infant Christ in Bethlehem; she mothers the Mystical Christ at Jerusalem; and now, by her Assumption, she goes ahead like her Son to prepare a place for us. She participates in the glory of Her Son, reigns with Him, presides at His Side over the destinies of the Church in time, and intercedes for us, to Him, as He, in His turn, intercedes to the Heavenly Father.

Adam came before Eve chronologically. The new Adam, Christ, comes after the new Eve, Mary, chronologically, although existentially He preceded her as the Creator a creature. By stressing for the moment only the time element, Mary always seems to be the Advent of what is in store for man. She anticipates Christ for nine months, as she bears Heaven within her; she anticipates His Passion at Cana, and His Church at Pentecost. Now, in the last great Doctrine of the Assumption, she anticipates heavenly glory, and the definition comes at a time when men think of it least. 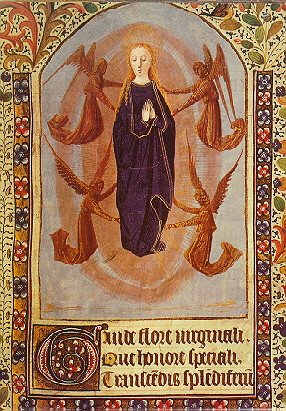