A recent post here on the Missal, focusing on another clerical blogger using a forum with apparent ecclesiastical status, criticised in it the translation, by way of example, of the collect for the second Sunday of Lent, which begins “O God, who have commanded us…”. He and his language-savvy friends were aghast, with one exclaiming that the text had not been proof-read, and that this was a grammatical error. The blogger took me to task in the comments box for opposing him, as he is free to do, but never really dealt with my issue: that the grammar in the Missal is actually correct. Indeed, in the last of his many comments he persists in claiming that the faithful will continue to labour under “the (mis) understanding that we pray to God in the plural.”

The identity of the blogger is not important, but some issues arising from his posts do deserve attention early on lest they develop a life of their own.

First, the collect itself. The prayer is addressing God, talking to God as “you” – this is the vocative case, usually signified in English by use of “O”, thus “O God”; and employing the second person form of the verb. The prayer then goes on to remind God what he has done – “you have”, as it were. So the verb must agree with “God”. And it does – “O God, who have…”. Let’s be clear about this. The verb to have, in the present tense, has only two variants – “have” and “has”. “Has” is used only for the third person in the singular, “she has” for instance. In all 5 other possibilities it uses “have” – “I have”, “you (singular) have”, “we have”, “you (plural) have”, “they have”.

So when you see “have” there could be several possibilities. We can determine which is the correct one by looking, in this case, just before it, “O God, who have commanded…”. The “who” doing the commanding is God, to whom we are talking, so the second person must be used, and in both singular and plural this would be “have”. Now my interlocutor seems to think that most will opt for the plural understanding, even though we are clearly saying “O God”, not “O Gods”. The meaning is quite clear if we will but look.

Now if, as my interlocutor claims, most people do in fact read this as a plural (and I doubt it, but let’s run with it) then we have two remedies possible. Either we dumb down our language to suit the lowest common denominator among our audience vis a vis their level of grammatical knowledge, or we can teach them the grammar involved.

One could argue that another construction could have been used in this translation, and indeed there are several ways of translating the original Latin into English. However, we would then be into the realm of taste and personal preference. As to grammatical correctness, the construction employed by the Missal is correct. End of story. It is the option that has been chosen, and so it is the one we must explain to any who do not understand it. Some priests seem to prefer consoling the people who do not understand by saying that it is poor English, archaic, inelegant, too formal and the like. This seems a betrayal of their duty to serve the Church and not themselves. There is a time and place for cleric’s personal opinions, but not usually in forums carrying the approbation (real or implied) of the Church. There, the servants of the Church should explain the Church’s teachings or decisions and so promote the understanding and peace of mind of the faithful.

Of course, sometimes it is easier to be the rebel, appoint oneself a prophet and claim to know better than the Church. Certain people will love it, as it suits their temper or prejudice. But an opportunity for real growth in the Church will have been lost. Moreover, if the many experts and bishops involved in the process of translation have chosen this construction, quite frankly, who am I to gainsay their decision? They made a choice for a register of language that suited the formal nature of the Church’s liturgy. The mania in many places for cosy, home-made, smorgasbord liturgies is modern and has no warrant in either the history or the rubrics of the liturgy. The liturgy is not ours to change as we will; it is the Church’s liturgy which we enact in our local communities for our own benefit as well as that of all the Church.

My interlocutor dared me to find a similar construction outside the realm of liturgy. In doing so he missed the real point. This choice is precisely for the liturgy, so a non-liturgical or secular example is irrelevant. Again, it is a matter of taste not of grammar. The bishops have opted for a grammatical register that reinforces the formality of the liturgy, an elevated tone used to address the Most High God in formal worship. We can address God in cosier terms in our private prayer, wherein it would be quite fitting at times to adopt a more familiar tone with Him. Liturgy and private or personal prayer are not the same thing. Occasionally they can meet: Our Father, who art in heaven, hallowed by thy name… (which looks suspiciously like the construction complained of in the new Missal!) 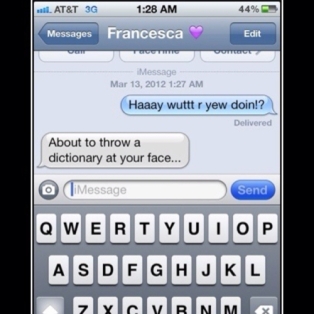 Another issue which emerges here into the light, and which extends beyond the relatively narrow confines of the liturgy, is the state of the English language in general. Our language has been dumbed down. Mobile phone text-speak, media-mutilations of words to suit advertising campaigns and the like, the television 10-second soundbite, and other forces, have stripped away the depth and complexity of our language. The English of Shakespeare, Jane Austen, Hopkins, Newman, Monsignor Knox, Chesterton and the many other great writers has been all too often reduced to a series of simple, one-clause sentences. The demands of political correctness have forced on us the absurdity of such horrors as “if a person would like a copy, they should come to the office”, a grammatical atrocity.

It would be interesting to see a study on the correlation between the level of a person’s language skills and his (or her) powers of reasoning, thought and comprehension. It would be no surprise if we were to find that with less ability both to use and to understand complex language, there is a corresponding lack of ability to comprehend complex ideas or arguments. As our language dumbs down, perhaps also our thinking dumbs down. This might explain why so many people get their information from quick-fire sources such as tabloids and internet news sites. They have little attention span for more, and their brains have become used to a diet of easily digestible and insubstantial crumbs of information and argument.

There is no need for our liturgy to reflect this decay in the English language. Indeed it should sit somewhat above the fads, fashions and decayings of the vernacular as far as possible, lest it become their victim. Our worship should be a constant, a rock of security in the midst of a too-quickly (and often too-fruitlessly) changing world.

Whether it suits our taste or not, the bishops have made their choice in the language of the new Missal. We can either get on with drinking deeply from its riches, and helping others to do so, even if this means a grammar lesson or two; or we can white-ant the Church’s enterprise, putting our preferences first. In the latter case we might find ourselves on the wrong side of our Lord’s judgement, “whoever is not for me, is against me” (Luke 11:23).

8 thoughts on “Straining at gnats: on liturgy and language”

This icon has many references to the war, and the recovery therefrom, eg the return of wildlife as an emblem of the return of the deported population, the gates of the camp for the forced labourers. It is very subtle, but Our Lady is standing not on the head of a snake, but on barbed wire.
My thanks to the Order of Malta for a wonderful 24 hours in Ramsgate, and you Fr Simon at the Shrine of St Augustine. It was worth the 5 hours driving back this evening!
Given in which vineyard I now labour, this seemed a well-omened place to park.
Not really what one wants to see after a good meal.
The Spirit of God breathes where He will, that even stone may bear fruit.
Obsessive or prudent? On not being a commodity. Visit to find out more...