A proper post is coming soon, and on a topical issue. In the meantime here is a brief homily – homilette – preached today in the abbey church at the Mass for Candlemas, the feast of the Presentation of our Lord and the Purification of his blessed Mother (one of the Church’s most ancient feasts. It will make more sense if you cast your eyes over the readings set for Mass: Malachi 3:1-4; Hebrews 2:14-18; Luke 2:22-40.

It is the fortieth day since the feast of the birth of our Lord Jesus Christ, and we have entered his temple to commemorate the day, the fortieth after he was born, when Christ entered the Temple in the arms of his mother, in obedience to the Law of Moses.

What exactly was this Law they obeyed? As found in Leviticus 12 it laid down that a mother present herself to the priest, bringing with her a lamb, or if she were poor some turtledoves or pigeons, with which the priest would offer sacrifice to purify the mother after the loss of blood in childbirth. We would be wrong to see in this some sort of primitive misogynistic disgust. Blood to the ancients was the life-force of the human body. So to lose blood was to flirt with death, which is of course the penalty for sin. Thus childbirth was something of a paradox – new life emerging in an atmosphere of sin and death. Childbirth could almost stand as an icon of fallen human nature in need of redemption.

There is a second strand to the Law as it concerns the aftermath of childbirth, found in Exodus 13. Here the focus shifts from the mother to the first-born. It prescribed that the child be brought to be offered to God. This was in consequence of God having slain all the first-born of Egypt when he delivered Israel from bondage there – in strict justice, the price Israel had to pay for its liberation was its own first-born, who likewise should be sacrificed to pay the price. But the Law commuted this terrible debt to the vicarious sacrifice of a lamb, or again turtledoves or pigeons for the poor. By this sacrifice the first-born was redeemed from the debt, the lamb accepted in place of the babe.

The Jewish bystander in the Temple 2000-odd years ago witnessing the presentation of Jesus by Mary would have seen the outward performance of the same ritual as ever, but not the new and radically different reality beneath, which only Simeon and Anna seemed to perceive. Mary, the sinless one, had no need of purification under the Law. Christ, the eternal Word made flesh, had no need to be redeemed, for he did not  belong to God – he was God. Of course our Lord and our Lady subjected themselves to a law that did not bind them in order to fulfil it for those who were bound by it. The light of Candlemas lights the path to the day of Calvary when Christ would indeed become the lamb of sacrifice, not to purify the mother and redeem the first-born, but to purify and redeem all his people, the final and perfect fulfilment of the Law. As Simeon prophesied, the light of this day reveals the Cross – yes; but a Cross bathed in the radiance of the resurrection, a revelation to all the world and the glory of God’s people.

May the thoughts of our hearts be found able to stand before the light of our Lord’s second coming to his Temple. And may the Church shine ever brighter as a light of revelation to all nations. 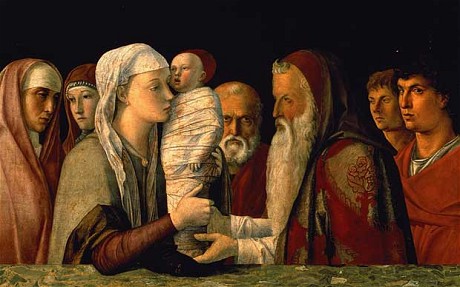