In Missal Moments III, in my innocent enthusiasm, I spent some time trying to explain the changes to the prayer at Mass we make before the reception of Holy Communion:

Lord, I am not worthy that you should enter under my roof, but only say the word and my soul shall be healed.

Often, and most recently at a talk I gave at a parish in Essex, people ask in particular why the apparently restrictive introduction of “soul” into the prayer. Before we had prayed, “and I shall be healed”. Some have begun to think that some sort of dualism is being secreted into the Mass, that somehow the Church thinks our bodies not worthy of healing, only our souls. Is this some sort of snub to the fullness of our humanity?, they wonder.

Part of my explanation was to expose the unconscious fallacy in people’s thinking when they suspect a denial of the bodiliness of humanity in this revised prayer. So many people think of the human body as somehow containing a soul, that the soul lies, as it were, in the deepest recesses of the body. Or perhaps they see it as one half of the human equation: body + soul = human person. Now that equation is not wrong in a sense, but put in those terms it is a little misleading.

All that wind I expended. If only I had re-read some C S Lewis recently! It took Facebook to remind me of something C S Lewis, in Mere Christianity, had said more pithily and directly and memorably than I did or could. 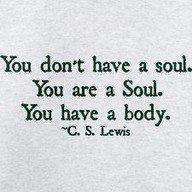 10 thoughts on “The body, the soul & the prayer before Communion”