Today is the Solemnity (at Douai at least) of St Edmund, King and Martyr, who is the patron of our monastery. So today is a good day to mention a little about him. He is mentioned in the Anglo-Saxon Chronicle, but our main source is Abbo of Fleury‘s Passion of St Edmund.

Edmund was born in about 841, and when he was 14 he succeeded to the throne of the independent kingdom of East Anglia when his father, King Æthelweard, died, and is said to have been crowned on Christmas Day in 855 by St Humbert, Bishop of Elmham (forerunner of the see of Norwich), who was himself later martyred by the Danes. Edmund was considered a model king, even-handed in all his dealings and with little time for the flatterers that are the constant attendants of the great and the powerful. He was obviously devout, and it is recorded of him that he retired for the best part of a year to Hunstanton in order to learn the psalter by heart, a very monastic thing to do! 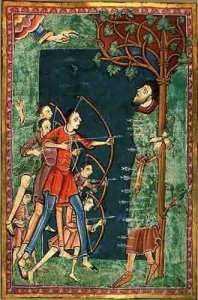 The centuries surrounding the time of St Edmund were, of course, difficult ones for Britain, as the Vikings ravaged its shores in fits and starts over several hundred years. So it was that in 869 (not 870 as originally thought), when King Edmund was still only 28, the Danes again invaded East Anglia under the Ivar (or Hinguar) the Boneless. King Edmund refused to meet the heathen Danes in battle, looking to our Lord’s command to Peter not to raise his sword against the unbelievers who came to arrest him in Gethsemane. Refusing to flee, Edmund gave himself into the hands of the Danes. Ivar had called upon Edmund to submit to him, but Edmund refused to submit to him unless he became a Christian. So young King Edmund was seized and beaten, then tied to a tree and shot full of arrows such that he looked like a hedgehog, much as the earlier Christian martyr, young St Sebastian, was. Still alive, and still calling on the name of the Lord, the Danes dragged him away and cut off his head, throwing it into brambles before they left.

There are two poignant sequels to this, perhaps legendary but still instructive. One is that, after the Danes had left, the Anglians sought King Edmund’s head and found it being guarded by a wolf, which would not let any other animal near it to devour it. As the people took the head back to be buried the wolf followed at a distance and did not leave until the head had been given Christian burial. The place of the martyred king’s tomb soon became Bury St Edmunds, one of the most popular shrines of medieval England, and the site of one of the great Benedictine abbeys of England, the memory of which our abbey perpetuates today.

The second sequel involves the last heathen Danish King, Sweyn Forkbeard, father of the famous King Canute. He had laid siege to Bury St Edmunds in 1014, seeking to seize its treasure, and threatened to destroy the town and abbey and put all the clergy to death unless they handed the treasure over to him. As he made his demands he taunted the memory of St Edmund buried within its walls. But as he waited to attack the town he saw St Edmund, crown on his head and a lance in his hand, coming towards him from the heavens. He cried out for help, “Edmund is coming to kill me”. At that point he fell to the ground in convulsions and died. Sweyn’s son, Canute, became a Christian, perhaps bearing in mind his father’s death… it is nice to think so, at any rate.

Subsequent English kings took St Edmund as their patron to the point where St Edmund became patron saint of England. However, after the Norman conquest, the new regime was not overly pleased with an Anglo-Saxon king as patron saint for the country, fearing he might become a focus of unity for local opposition to their conquest. So by the time of Edward III St Edmund had been displaced by St George, a supposed warrior saint of the middle east whose devotion was taken up by crusaders in the Holy Land. St George, being neither Anglo-Saxon nor Norman, was seized on as a neutral saint that could unite the nation. Sadly the Catholic Church today seems to have acquiesced in this arrangement, no doubt because it feels it has bigger battles to fight. 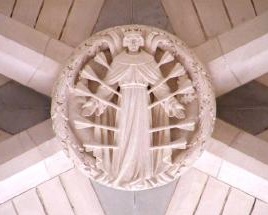 Nevertheless, St Edmund stands as a fitting patron for England, and indeed a shining example of Christian leadership for the world today. He refused to take up his sword against heathen enemies both because Christ himself refused to use violence against his persecutors, and because it would only bring further hardship on his people. While there may indeed be occasions when resistance to evil in the world is called for, violence can never serve the cause of spreading the Gospel. Compelled faith is no faith at all. It is in this light that we might look on the modern blight of Muslim fundamentalism. All too often conversion to Islam is enforced by violence, and those who convert from Islam are subject to the sentence of death. Even worse are the suicide bombers, who feel that their terrorist acts are a form of martyrdom. St Edmund, who modelled himself on Christ, reminds us that martyrdom can never involve taking the lives of others. Rather martyrdom is to allow one’s own life to be taken in witness to Christ, whose own martyrdom brought not death but life to the world. Martyrdom is the ultimate witness to the value of human life, that it is always better to lose one’s own life for Christ’s sake than to take another’s life in his name, for in so doing we gain the fullness of life for eternity.

We might all make our own the Collect at Mass and Divine Office for the feast of St Edmund:

O God of inexpressible mercy, who gloriously enabled the most blessed king Edmund to overcome the enemy by dying for your name, grant, in your mercy, to us your servants that by his intercession we may overcome and extinguish the temptations of the old enemy, through Christ our Lord. Amen.

P.S. Interestingly, St Edmund is also the patron saint of Suffolk, against pandemics and plague, of wolves (!), of kings, of torture victims, and curiously, apparently also of Toulouse in France, where his relics, stolen by French knights, were taken in the early 13th century.

3 thoughts on “The Solemnity of St Edmund, King & Martyr, the abbey’s patron.”

Obsessive or prudent? On not being a commodity. Visit to find out more...
The milk frother on my El Cheapo Beko coffee machine seems to have died. It makes all sorts of anguished groans but not a whiff of steam comes out. More worryingly, the groans continue after I've switched off the frother function.
In the potting shed this afternoon, I felt I was being watched. I was...
Cheer up, possum.
If you would like a little joy to balance your Lenten penance... Just putting it out there...😏
A kind gift arrived today, leaving me spoilt for choice as to the first holy distraction. Do check out Arouca Press' rich, unique, traditional but non-polemical catalogue which is always very decently priced.